VOLVO CARS AT TECHNO CLASSICA: ART DECO ON THE MOVE WITH THE VOLVO PV36

VOLVO CARS AT TECHNO CLASSICA: ART DECO ON THE MOVE WITH THE VOLVO PV36 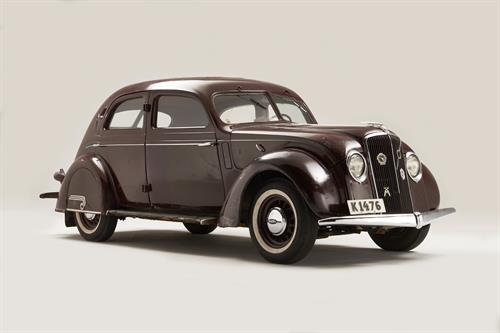 Art Deco on the move with the Volvo PV36

Volvo Cars is revisiting the Art Deco era at this year's Techno Classica Essen in Germany, the world's largest historic car show, with a 1935 Volvo PV36 once owned by one of the company's founders.
Gustaf Larson, one of Volvo Cars' two founding fathers back in 1927, drove the American-styled PV36 for several years, and that car will headline the company's display in Essen. The show will also serve as the German car show debut for the all-new US-built Volvo S60 sports saloon.
The PV36 is an example of Streamline Moderne, one of the most prominent design trends in the US in the early thirties. Buildings, trains, boats and even home appliances such as toasters and steam irons were designed in this late Art Deco style, described as "Art Deco on the move" due to the aerodynamic features.
Engineer and designer Ivar Örnberg brought the style to Volvo when he returned to Sweden in 1933, having worked in the American automotive industry for a few years. At Volvo, he was tasked with designing the PV36, and it was clear that the years at companies such as Hupmobile were fresh in his mind.
With the new Volvo model, Örnberg introduced the Streamline Moderne influences to Sweden. The exotic-looking car was soon nicknamed the 'Carioca', most probably after a popular Latin American dance at the time. According to plans, Volvo produced only 500 cars of this model between 1935 and 1938.
The PV36 on display in Essen has low mileage but a rich history. The model was one of the first to be produced by Volvo, just a few years after engineer Gustaf Larson and economist and salesman Assar Gabrielsson decided over a crayfish dinner in 1924 to start a Swedish car company.
Eleven years later, Larson got the key to this Volvo PV36 with chassis number 85. He kept the car for three years, and barring a respray in its early days, it has been practically untouched since.
This PV36 is a unique link directly to one of Volvo Cars' founders, and a fascinating example of how a decidedly American design style reached a small Swedish car company in the thirties.
The Techno Classica car show attracts around 200,000 visitors every year. Dates for the 2019 show are April 10-14. Other historic Volvo saloons that will be presented at the Volvo Cars stand include:
• 1929 PV4 – Volvo's very first saloon
• 1966 Amazon – a Volvo design icon
• 1969 164 – six-cylinder prestige car from the '60s
• 1981 240 Turbo – Volvo's first turbocharged passenger car
• 1995 850 T-5R – performance saloon from the '90s