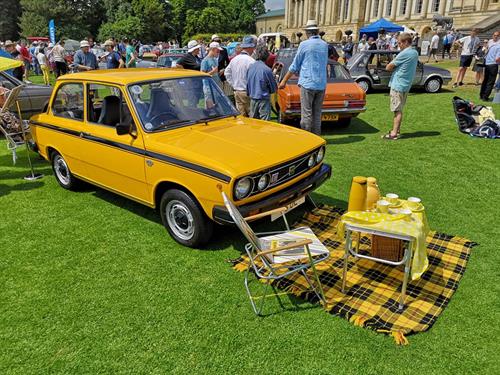 The 2019 Festival of the Unexceptional a Concours de l’Ordinaire – created and delivered by leading classic vehicle insurance and valuation specialists, Hagerty – will be held for the sixth year in succession on Saturday 20 July.
Originally staged by Hagerty back in 2014 as the first event of its kind in Europe - to celebrate the ordinary, everyday cars that we all grew up with, but have now all but disappeared - the light-hearted Festival of the Unexceptional (or FOTU) has already become a must-attend event for admirers of the mundane motor cars of our past, and has achieved cult status around the world.
For 2019, the location for this unique and fun Hagerty event is the beautiful, concours befitting, Claydon Estate in Buckinghamshire. Claydon House is a fascinating testament to eighteenth-century extravagance and its unassuming exterior hides some of England’s most extraordinary interiors. The estate was built in the eighteenth century by Ralph, 2nd Earl Verney, as a demonstration of wealth and status offering a deliberate juxtaposition with the Hagerty concours, which celebrates the much maligned and long forgotten ‘ordinary’ classic cars and commercial vehicles of the late 1960s, 70s and 80s.
Once again, Hagerty’s annual Concours de l’Ordinaire will be free to attend for the first 600 people and will be only £5 per person thereafter. The event is open to classic cars and light commercial vehicles from across the globe that were built between 1966 to 1996. Rare cars already entered for consideration for the 2019 FOTU include a 1991 Yugo 45 Cabriolet, 1982 Peugeot 305 Estate, 1987 Honda Accord Aerodeck and a 1983 Triumph Acclaim.
Any owner of a suitably mundane but interesting ‘unexceptional’ 1966-1989 vehicle can register it for consideration and potential participation by 31 May at the latest, using the following link; https://carfestivalbooking.com/events/festival-of-the-unexceptional-2019-concours-registration.
Free public admission tickets will be available 23 April 2019 here: https://carfestivalbooking.com/register?fotu2019
2019 sees a new element added to the Concours de l’Ordinaire with the Anniversary Class. This new category celebrates vehicles that have a significant anniversary in 2019, such as 50 years of the Austin Maxi, 50 years of the base-spec Capri, 40 years of the Vauxhall Astra and so on. Already submitted are eligible vehicles such as a 1987 Capri and a 1969 Austin Maxi.
The 2019 event will also see the return of Hagerty’s Feast of the Unexceptional, the period picnic equivalent of the mundane automotive display. All participants are encouraged to bring out the Arctic Roll, Texan bars, cheese fondue and, of course, the obligatory bottle of Asti Spumante!
Angus Forsyth, Hagerty’s Managing Director said: ‘Our annual celebration of our motoring heritage continues to help raise the underlying issue that more and more of the cars we used to see on the road are fast becoming extinct. Our event will hopefully raise awareness of the rarity of some of the models on display and allow their owners a moment in the limelight. As always, we welcome all motoring enthusiasts as well as those families who simply enjoy a healthy dose of nostalgia.’
As in previous years, there will be awards for Best In Show, Runner Up, People’s Choice and Junior Judge’s Choice (as voted for by those under 18) plus, naturally, the Feast of the Unexceptional Award for Best Picnic of the day!