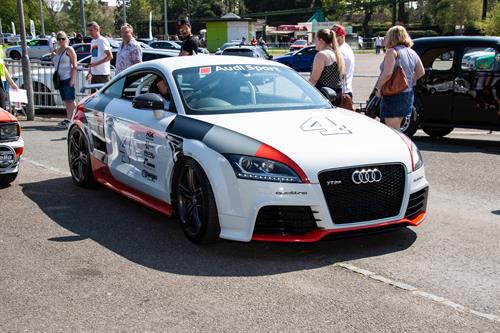 A record 982 rally participants made Beaulieu’s second Simply Audi the busiest yet – with a 25% increase over last year’s total of 784 – for the vibrant Easter Sunday rally.
A highlight of the bank holiday weekend for motoring fans, as many as 472 Audis parked up in the grounds of the National Motor Museum with cars ranging from the latest showroom models back to 1980s classics. Impressive R8 supercars and sporty TTs were joined by examples of the performance-tuned S2, S3, RS3 and RS4, with something to please every fan of the ‘Vorsprung durch Technik’ philosophy.
Past glories of the Audi marque were also on show with several examples of the 1980s Audi Coupes, while club displays included the Audi ‘80’ Cab/Coupe enthusiasts with a line-up of the much-loved modern classics from the 1980s and ’90s.
Taking the coveted event’s People’s Choice Award was Kerrin Martinez, from Taunton, with his Audi TT RS. Kerrin said: “I’ve owned it for 13 months and have done almost everything on it, except the tuning remap, while my brother did the vinyl wrap. I love it because it’s so fast and really enjoyable to drive.” Kerrin was presented with a commemorative Beaulieu trophy, Autoglym car care pack and Easter egg by Beaulieu’s Visitor Services Manager Jon Tee.
Also presented with Autoglym prizes and Easter treats were runners-up Chris Smith, from Ringwood, with his Audi RS6, and Darren O’Neil, from Portsmouth, with his Audi Quattro rally car. Chris has owned his sleek Audi RS6 for just three weeks but has already modified it with different wheels, tinted glass, air suspension, exhaust and intake manifolds. He said: “I love its presence and the fact that it’s a family car with 650bhp.” By contrast, Darren has owned his 1982 Audi Quattro rally car for 17 years and during that time has transformed it from a road car to a stunning works replica.
Simply Audi was the second of Beaulieu’s ten Simply rallies for 2019. Coming next is Simply Ford on May 5th, followed by Simply Porsche on June 2nd, Simply VW on June 15th, Simply Land Rover & Rummage on June 23rd, Simply Jaguar on July 14th, Simply Japanese July 28th, with the first Simply Mercedes on August 18th and Simply Smart on November 10th. Tickets can be bought in advance online. For tickets and details see www.beaulieu.co.uk/events.
Find us on Twitter @Beaulieu_Hants, on Facebook at /nationalmotormuseum or on Instagram @national_motor_museum and join the conversation.