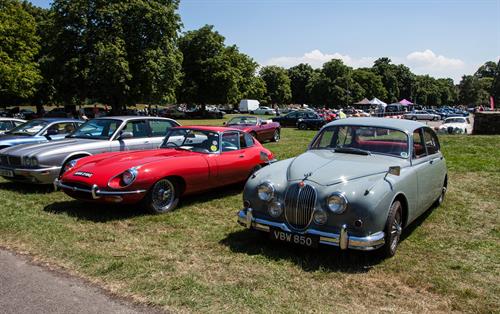 Sunday, July 14th 2019
Beaulieu will celebrate the 60th anniversary of the iconic Jaguar MkII at Simply Jaguar on Sunday July 14th with a special display area dedicated to this legendary sporting saloon.
The quintessential 1960s model has been a favourite with motoring enthusiasts and racing drivers since its launch in 1959. It is probably best known on TV as the star car of ITV’s popular Inspector Morse detective series.
MkII and all Jaguar owners are invited to park in the grounds of the National Motor Museum to compare their prized cars and catch up with fellow enthusiasts.
As many as 400 sleek Jaguars are expected to drive into the show, which will also feature a special area for the E-type – MkII’s sister car. Show-goers will relish the opportunity to see these stylish roadsters and coupes of the 1960s and 1970s take their place in the display.
All ages and models of Jaguar are welcome at Simply Jaguar, from examples of the latest F-type and F-pace, through the XK, XJ-S, XJ6 and MkX, going all the way back to the earliest versions.
Throughout the day, visitors and event-goers will be able to vote for their favourite Jaguar of the show in the People’s Choice Award, with the winner receiving a Beaulieu trophy.
Event tickets include entry to all of the Beaulieu attraction, including the National Motor Museum with its Chitty Chitty Bang Bang 50 years exhibition, World of Top Gear, On Screen Cars, 13th century Beaulieu Abbey, the Montagu ancestral home of Palace House and its grounds and gardens.
For those driving Jaguars and taking part in the show, participant tickets are £10 an adult, £5 a child (aged 5-16) if bought in advance online before 5pm on July 11th, or £12 an adult and £6 a child on the day. All other visitors can buy general admission tickets to Beaulieu at the standard attraction price. For tickets and information see www.beaulieu.co.uk/events/simply-jaguar.
Entry is from 9am - 3pm for rally participants. The Brabazon Restaurant will serve hot drinks and breakfast snacks from 9-11am. All other visitors should enter Beaulieu though the Visitor Reception building with a standard attraction admission ticket, from 10am.
Simply Jaguar will be Beaulieu’s seventh Simply rally this year, followed by Simply Japanese on July 28th, the first Simply Mercedes on August 18th and Simply Smart on November 10th. For tickets and details see www.beaulieu.co.uk/events.
Find us on Twitter @Beaulieu_Hants, on Facebook at /nationalmotormuseum or on Instagram @national_motor_museum and join the conversation.