WELCOME TO THE WORLD’S MOST POWERFUL GARAGE: THE MICHELIN SUPERCAR PADDOCK AT GOODWOOD FOS 2019

WELCOME TO THE WORLD’S MOST POWERFUL GARAGE: THE MICHELIN SUPERCAR PADDOCK AT GOODWOOD FOS 2019 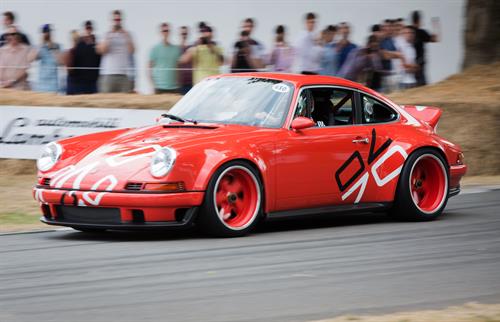 The Michelin Supercar Paddock is in a new location next to the start line, offering more cars and an immersive walkthrough experience for fans. With everything from unique start-up brands to the latest race iterations from the world’s most famous marques, the Paddock is guaranteed to have a supercar for everyone.
Here’s an exclusive preview of some of the stunning supercars set to feature in the Supercar Paddock and Michelin Main Stand at Goodwood Festival of Speed this week.
Prato Orage
At Goodwood this year, Michelin has its very own Supercar Paddock garage all to itself. Dedicated to the crème de la crème of the supercar world, it’s the utterly outrageous Prato Orage that holds the key to the spot this year. The stylish 900bhp, limited-production French supercar produces over 1,000 Nm of torque and surges from 0-60mph in under 3 seconds. When first launched, it was the most powerful naturally-aspirated V8 engine ever installed on a production car. Keep a lookout too for its driver, Oli Webb, who will be on the Supercar Paddock stage throughout the four-day event!


Porsche 935
Making its dynamic debut at the Festival of Speed, this very special track-only car is inspired by the iconic 1970s racer. Revealed earlier this year, only 77 models of this eye-catching powerhouse will be built, each packing the same 690bhp, 3.8-litre twin-turbo flat-six and chassis underpinnings of the latest 911 GT2 RS. Porsche have achieved the seemingly unachievable by reviving the ultimate legend. With all of its history to cater for, it’s duty-bound to be a treat for the ears too!


Charge Mustang
Mustang purists may be squirming in their seats at the mere thought of a fully-electric version of their favourite classic, but this 150mph, four-wheel drive torque-demon brings the classic car into the future. Charge Cars have revived a Mustang that guarantees the future of this iconic car that is needed in today’s fast-moving automotive world. The supercar is a 400kW power-pack produces a gargantuan 7400Nm of torque, propelling it from 0-60mph in under 4 seconds – almost half that of the original car.


W Motors Fenyr Supersport
With only 100 to ever be built, the Fenyr Supersport is a ferocious, 790bhp, Middle Eastern force on the tarmac. It’s a hypercar claiming a mind-boggling 250mph top speed figure and will get from 0-60mph in a blistering 2.7 seconds. This successor to the outlandish Lykan Hypersport is expected to give some incredible off-the-line action at the FOS.


Porsche 911 Reimagined by Singer Vehicle Design – Dynamics and Lightweighting Study
Singer does business in a unique way: taking everything it loves about Porsche and reimagining it into something of a greatest hits album, and the result is stunning. The Porsche 911 Reimagined by Singer ‘Design & Lightweight Study’ is the 500bhp, 990kg Porsche restomod that took the world by storm at the Festival last year. Specialists Singer have teamed up with Williams Advanced Engineering to create a perfectly crafted 911. With the 964’s original 243bhp, 3.6-litre flat-six engine tweaked to a 4-litre unit with four-valve heads and a whopping 493bhp, the DLS boasts a higher bhp-per-tonne ratio than the McLaren 720S.


Apollo Intensa Emozione
Last year’s Michelin Showstopper of the Festival is back. Well, sort of! A new updated version of the utterly insane Apollo Intensa Emozione - Italian for ‘intense emotion’ – has a primary goal of delivering exactly that without compromise. The €2.3 million track-only hypercar will be found in the Michelin Supercar Paddock this year. Aerodynamically focussed, it's a beast that sports a 6.3-litre naturally-aspirated V12 and weighs only 1,250kg. The IE can hit 0-62mph in 2.7 seconds and carry on to a rapid 208mph. It creates enough downforce to (theoretically) drive upside-down and has a 3D laser-printed triplet exhaust that costs more than a new BMW M4. What more needs to be said…


Lotus Evora GT4
Lotus have a habit of creating the extraordinary. Breaking records, pioneering new innovations and going fast. Very fast. In just a few weeks’ time, the iconic Lotus brand will unveil an all-British, all-electric hypercar, but that isn’t stopping the 71-year-old start-up from focusing on the here and now. A return for the legendary Lotus motorsport DNA, the Evora GT4 will take the fight back to the world’s fastest GT racers. Unveiled in Shanghai earlier this year, the racer brings over six decades of racing expertise to the global GT world. The GT4 will be up on the Michelin Supercar Paddock stage over the four-day festival after, of course, it makes its worldwide dynamic debut up the Hill.


Koenigsegg Agera RSN
This monstrous V8-powered hypercar from Koenigsegg is no ordinary Agera. It uses the same monstrous 1,360bhp, 1,011lb-ft powertrain as the legendary One:1 – the world’s first megacar. Last year, the standard Agera RS became the fastest production car in the world, making this version – with a 200hp increase in power – even quicker! Be prepared for a total obliteration of the Goodwood hill. If that isn’t enough Swedish power for you, then head over to the Michelin Main Stand where Koenigsegg’s latest hypercar – the Jesko – will be sat. With an eye-watering 1,600bhp, it’s set to break the production speed record again with a staggering 300mph+ top speed.


Ginetta Akula
Another car to spot in the Michelin Main Stand is the all-new road-going supercar from Ginetta. Named after a Russian submarine, the Akula is not a supercar to lurk in the shadows. On paper, it certainly looks like it can deliver, sporting a full carbon fibre body and with well over 600bhp coming from its naturally-aspirated V8, the Akula is a study in lightweight construction and aerodynamics. This is a supercar that uses all of Ginetta’s extensive experience in building some of the world’s best track predators to create a serious road-going, racing weapon.


Dendrobium D-1
You might be forgiven to think that there will be an Asian orchid within the Michelin Main Stand but this Dendrobium is anything but a delicate flower. It’s nothing short of a monster, with 1,800bhp and 1,475lb of torque at its disposal. With the power to change perception, it sure packs a fearsome punch! The D-1 is a multi-layered, all-electric powerhouse. According to Dendrobium “performance is redundant if we can’t get the power down on the road.” That’s where Michelin’s advanced understanding of the laws of physics and tyre compound chemistry comes in. Bucket loads of grip are required to keep this stunning hypercar glued solidly to terra firma – make sure you pay it a visit this weekend!
Posted by jeffharris at 16:09