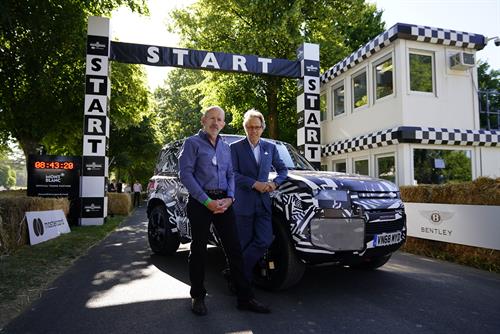 Duke of Richmond opens the 2019 Goodwood Festival of Speed

This year’s Goodwood Festival of Speed presented by Mastercard has been officially opened by the Duke of Richmond driving a prototype of the new Land Rover Defender up the iconic Hill.
The test vehicle, which is in the final stages of its global engineering development program, will tackle the course each day of the festival and is sure to wow crowds as they look to get a glimpse of the modern-day version of Land Rover’s most enduring model.
Despite wearing a camouflage pattern to hide its shape, the recognisable Defender silhouette was clear for all to see as it accelerated up the Hill.
The Duke of Richmond said: “Few vehicles in the world can claim to be an icon, but that’s the only way to describe the Land Rover Defender. It’s extremely close to my heart and a vehicle that I’ve had a close connection with over the decades, so to be able to open this year’s Festival of Speed by driving it up the Hill was a real privilege.”
Industry legend and Land Rover Chief Engineer, Mike Cross, is the man responsible for the driving characteristics of the new Defender and will be putting the new 4x4 through its paces across the weekend in the First Glance category. He said: “The new Defender will redefine breadth of capability for the 21st Century, combining unrivalled off-road ability with assured and engaging on-road dynamics. I am really excited to be putting it to the test on the Hill."
The new Defender has just returned from field testing in Kenya with wildlife conservation charity Tusk, to highlight the decline in lion populations in Africa as part of its Year of the Lion initiative.
Timings for the Defender Hillclimbs at the Goodwood Festival of Speed

Tickets are still available for purchase from: www.goodwood.com/motorsport/festival-of-speed/