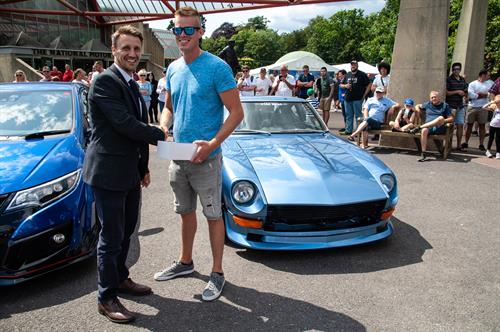 Beaulieu’s Simply Japanese marked 30 years of the Mazda MX-5 and 50 years of the Nissan GT-R, as first-class examples of these iconic performance cars joined the bumper display of 1410 Japanese cars, which was up 49% over the 2018 total of 947 cars.
As many as 2547 show participants enjoyed the sunshine and the packed display in the grounds of the National Motor Museum on Sunday 28th July, which saw all manner of Japanese cars join the show, from original-spec stunners to modified examples.
The popular Mazda MX-5 and Nissan GT-R were well represented in their anniversary year, showcasing these successful models at their best. Other favourites with show-goers included the Toyota MR2, Mitsubishi Evo, Nissan Cube, Honda Civic Type R and more, while displays by car clubs including SouthCoastJap, Hampshire Honda Crew and Celica-Club were at the heart of the show.
Show-goers voted for their favourite Japanese car of the show in People’s Choice Award, with Daniel Smart from Poole winning with his 1995 Nissan GT-R R33. In just one year of ownership, Daniel had rebuilt the engine, upgraded the brakes and carried out a whole host of improvements to his high-performance V-spec coupe. He was presented with a Beaulieu trophy and Autoglym car care pack by Beaulieu’s Visitor Services Manager Jon Tee.
Also scoring highly were runners-up Aaron Britton from Portsmouth and Lee Smith from Poole. Aaron’s 1972 Datsun 240Z turned many heads with its impressive blue paintwork. “I’ve done a lot to it, so it’s pretty much had a full restoration,” Aaron said. Lee had owned his 2015 Honda Civic Type R from new, having carried out work to the engine, body, wheels and interior. “I’m a petrolhead by nature and I’ve been doing up cars since I was 12 years old,” Lee said. Both Aaron and Lee were presented with Autoglym prizes.
Simply Japanese was Beaulieu’s eighth Simply rally this year. It will be followed by the first Simply Mercedes on August 18th and Simply Smart on November 10th. For tickets and details see www.beaulieu.co.uk/events.
Find us on Twitter @Beaulieu_Hants, on Facebook at /nationalmotormuseum or on Instagram @national_motor_museum and join the conversation.