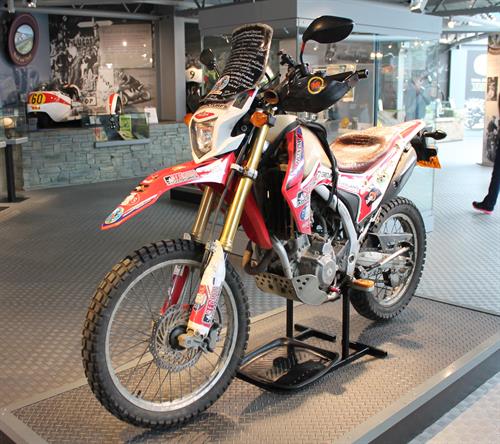 Rhonda the Honda at Beaulieu

A Honda motorbike ridden 74,000 miles around the world by record-breaking adventurer Steph Jeavons has joined The Motorcycle Story in the National Motor Museum, giving Beaulieu visitors the chance to see this well-travelled machine.
After the four-year solo around-the-world adventure – which saw Steph become the first Briton to ride on all seven continents – her trusty 2013 Honda CRF250L is taking pride of place in the display.
Affectionately nicknamed Rhonda the Honda, the plucky motorbike took Steph through 54 countries including Thailand, Chile, Turkey, Panama, Canada, Egypt, Australia and even Antarctica. Today, it wears its battle scars with pride, still bearing the stickers from its epic journey and a stone guard bearing the names of all of the countries it has visited.
Author, journalist and adventurer Steph rode across the hottest, driest, wettest and coldest environments, with challenges ranging from tackling the frozen landscape of Antarctica to getting caught in a Himalayan landslide. During her travels, she also politely refused six marriage proposals!
The journey took in some of the longest and highest roads and tested the Honda’s reliability to the limit. Yet despite its lightweight in contrast to the heavier, larger capacity motorbikes usually favoured for long-distance adventures, the 249cc Honda proved to be very reliable. Steph suffered from just four punctures in four years, with only a broken sub-frame in Indonesia and a faulty starter relay in Tanzania to slow her down. Visit www.stephjeavons.com to find out more about her journey.
Rhonda the Honda can be seen as part of a visit to the National Motor Museum, home to a wide range of historic bikes and scooters in The Motorcycle Story that spans from the early days of motorised transport up to popular urban culture.
A ticket to Beaulieu includes entry to the National Motor Museum with its Chitty Chitty Bang Bang 50 years exhibition, World of Top Gear with new cars from the latest series, On Screen Cars, Palace House, the Secret Army exhibition, Beaulieu Abbey and the grounds and gardens. Tickets can be bought in advance online. For tickets and details see www.beaulieu.co.uk or call 01590 612345.