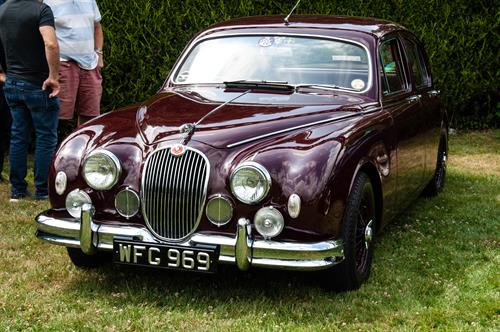 An all-time record of 474 Jaguars made Beaulieu’s Simply Jaguar the biggest and best yet, with luxury and sports cars from the British motoring legend roaring into the grounds of the National Motor Museum.
With an extra 59 cars to last year’s event, the fourth Simply Jaguar on Sunday (July 14th) was packed with a variety of eye-catching cars. The number of event-goers was also up from 860 last year to 940 this year.
The iconic Jaguar MkII, which was made famous by ITV’s popular Inspector Morsedetective series, was well-represented for its 60th anniversary year. It was joined by examples of its MkI predecessor and the class-leading XJ6 that replaced it.
Two pristine Jaguar SS saloons, dating from 1936 and 1937, were the oldest cars on show, while an equally impressive sight were examples of Jaguar’s stunning XK120, XK140 and XK150 post-war sports cars and impressive D-type replicas. Other crowd favourites included the much-loved E-type and XJ-S, plus the modern-day XK and F-type, while the Jaguar Driver’s Club and Jaguar Enthusiasts’ Club were both well-represented by members.
Show-goers voted for their favourite Jaguar of the show in the People’s Choice Award with Paul Baker, from Oxford, winning with his 1966 E-type roadster. An eye-catching machine in gunmetal with a blue hood, the E-type has received plenty of attention during Paul’s two years of ownership. He said: “I’ve done loads to it, including a full respray, new roof and an engine rebuild. It’s a style icon and I always aspired to have one.” Paul was presented with a Beaulieu trophy and Autoglym car care pack by Beaulieu’s Financial Director Phil Johnson.
Also scoring highly were runners-up Paul Whitfield, from Hook in Hampshire, and Alastair McIntyre, from Pinner in London. Paul’s 1956 Jaguar XK140 gave an impressive shine on the hot summer day. Paul said: “I just keep polishing it. I’m captivated by the colour combination of red with a beige interior and I love the 1950s style.”
Alastair has owned his 2016 Jaguar F-Type SVR, in Corris Grey paintwork, for two years. He said: “I’ve fitted new wheels and suspension to the car. I love it simply because it’s a Jaguar!” Both Paul and Alastair were presented with Autoglym prizes.
Simply Jaguar was Beaulieu’s seventh Simply rally this year. It will be followed by Simply Japanese on July 28th, the first Simply Mercedes on August 18th and Simply Smart on November 10th. For tickets and details see www.beaulieu.co.uk/events.