SECOND-OLDEST SURVIVING VAUXHALL TO TAKE ON LONDON TO BRIGHTON

SECOND-OLDEST SURVIVING VAUXHALL TO TAKE ON LONDON TO BRIGHTON 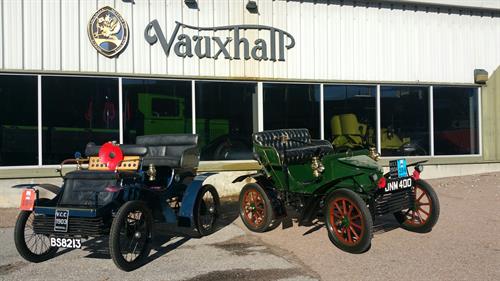 Proving that Vauxhall’s slogan, ‘British Brand since 1903’, runs more than skin-deep, two of the company’s oldest vehicles – one of which was built in the year Vauxhall was founded as a car manufacturer – will be taking on next Sunday’s Bonhams London to Brighton Veteran Car Run.
Acknowledged as the world’s second-oldest surviving Vauxhall, the 1903 ‘5HP’ will be taking on the 60-mile long Run for the first time since 2015, co-driven by Vauxhall’s Managing Director, Steve Norman, and former Communications Director, Denis Chick.
Vauxhall’s 5HP is the 45th vehicle built by the company. It’s a rare four-seat model, with passengers sitting over the engine, in front of the driver. Vauxhall Heritage purchased and restored the car, registered BS8213, 20 years ago and it has completed the Run on many occasions since. Originally bought for £154 3s 3d by as Scottish shipbuilder, 5HP has a water-cooled 983cc engine powering its rear wheels through an epicyclic gearbox and chain drive. Top speed is 20mph and fuel consumption around 38mpg.
Joining 5hp is Vauxhall’s 6HP model. Registered JNM 400, it was one of 70 cars produced in 1904 at Vauxhall’s original factory in South London. Making its 56th appearance on the Run, 6HP also features a one-litre, water-cooled single-cylinder engine, along with tiller steering and similar performance and economy to the 5HP. Vauxhall Heritage has owned the car for more than 40 years. Journalist, Steve Fowler, will co-drive 6HP with Vauxhall PR’s Simon Hucknall.
Vauxhall is the only surviving British car brand eligible to enter Bonhams London to Brighton Veteran Car Run, which is only open to cars built before 1905. Celebrating over a century of continuous vehicle production in London and Luton (its base since 1905), Vauxhall has produced over 14 million vehicles in its 115-year history.
The 2018 Bonhams London to Brighton Veteran Car Run marks the 122th anniversary of the first run in 1896, which celebrated the passing of the Locomotives on Highways Act the same year, giving road-going vehicles the right to travel at up to 14mph, instead of the previous 2mph in towns led by an escort carrying a red flag. The next event didn’t happen until 1927, and has been owned and organised by the Royal Automobile Club since 1930, with only the onset of the Second World War and fuel rationing stopping it being an annual fixture right up to date. Bonhams London to Brighton Veteran Car Run is now the world’s longest running motoring event.
For more information about this year’s Bonhams London to Brighton Run, which takes place on Sunday, November 4, please go to https://www.veterancarrun.com/event-info.