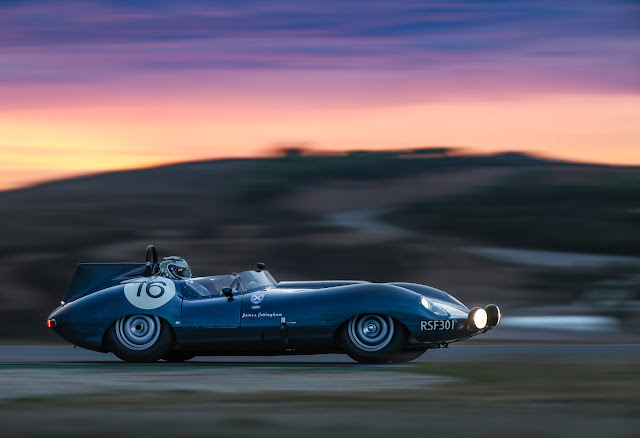 
Motor Racing Legends wrapped up their 2018 season at last weekend’s Algarve Classic Festival with two exciting battles which saw James Cottingham and Max Girado put on a faultless performance in their Tojeiro Jaguar to convert pole position to a win in the dusk-to-dark two hours 50s Sports Car race and the Mk2 Ford Escort of Mark Freemantle and Tony Paxman led home the Historic Touring Car Challengers earlier in the day. 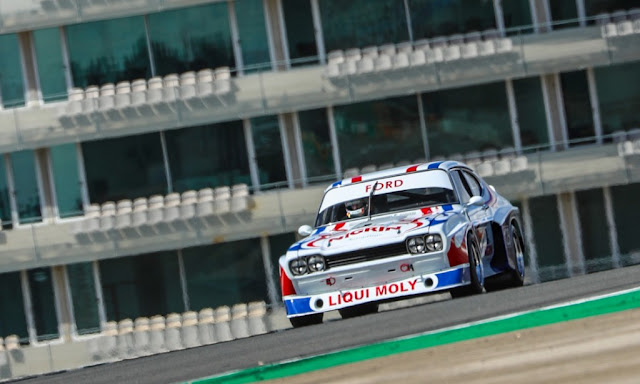 In the race, the mighty Ford Capri of Wood and Morgan pulled out a healthy lead, dominating the race before retiring 25 minutes from the flag. This left Tony Paxman and Mark Freemantle a clear path for victory in the Ford Escort, as Harding’s Escort suffered fuel pump issues on lap one from which they never fully recovered. The Rover SD1 of Fred Wakeman /Patrick Blakeney-Edwards/Mike Grant-Peterkin was nursed over the line to finish in second place, down to its last few drops of fuel and third home, the first of the Tony Dron Trophy competitors was the mighty Volkswagen Golf Mk1 GTi of Jim Morris and Tom Shephard.
Paul Mensley and Chris Eaton were fourth home in the Ford RS500 and Patrick Watts sharing his Ford Capri with Steve Soper, rounded out the top five, (second on the Tony Dron podium) - despite breaking their gearbox in qualifying and making a dash to Lisbon to pick up and fix a replacement.
The 50s Sports Car qualifying session, saw the Cottingham/Girado Tojeiro Jaguar secure pole position two seconds clear of the pack, ahead of the Cooper Monaco of Justin Maeers and Charlie Martin, with Patrick Blakeney-Edwards and Fred Wakeman in third in the Cooper T38, the first of the Woodcoters. 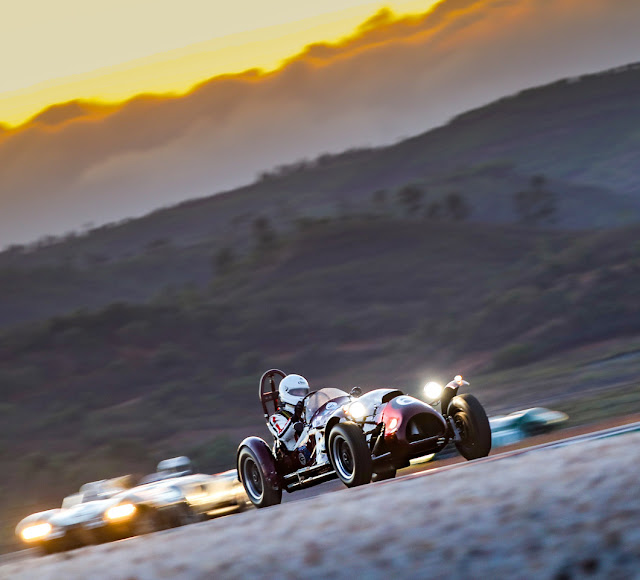 In Saturday’s race, Chris Ward – who shared the drive with John Young -  took the lead on the first lap in the Lister Knobbly from 5th position on the grid and over the following laps, continued to ease ahead.  Early retirements came from the Frazer Nash of Martyn Corfield with a poorly sounding engine and the Jaguar D-type of Steve Brooks and Martin O’Connell was retired on lap 12 with gearbox failure. 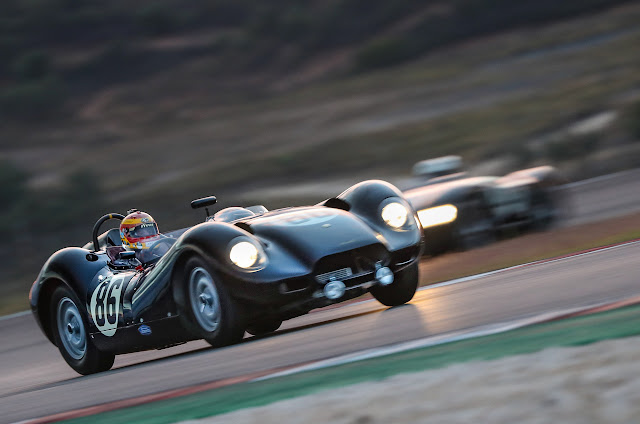 As the light faded, the order changed. A surprise pit stop by the leading Lister Knobbly of Young/Ward dropped them down the order. Young was sent back out, only to pit again a short while later - collecting a pit lane speeding penalty in the process. This saw the Lister drop to third behind the Cottingham/Girado Tojeiro and the now race leaders - the Cooper Monaco of Martin/Maeers.

With just twenty minutes of the race to run, the Martin/Maeers Cooper Monaco had eked out a healthy lead, but a late driver change and fuel stop left them exiting the pit lane just seconds behind the Tojeiro Jaguar of Cottingham/Girado which went on to take the win. The Cooper Monaco finished second and in the final laps, a hard-charging Chris Ward caught up - to finish on the podium in third place in the Lister Knobbly.

It was a double podium result for Patrick Blakeney-Edwards who co-drove Fred Wakeman’s Cooper finishing fourth overall and on top of the Woodcote podium, as well as 6th overall and second step of the Woodcote podium sharing Martin Hunt’s HWM. The Maserati 250S of Martin Stretton and Richard Wilson overcame a lack of headlights to finish third overall.

Thus the curtain falls on the 2018 Motor Racing Legends’ year. We hope you have enjoyed all the events and look forward to crowning the season’s winners in January in the usual style at the Royal Automobile Club in Pall Mall in January.