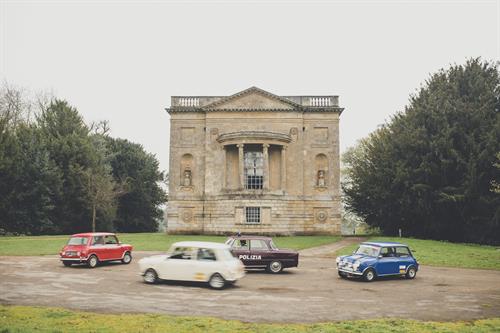 Northamptonshire: 25/05/2019: EMBARGOED TO 13.00
Leading classic car insurers and valuation specialists Hagerty has created a very special film to celebrate the 50th anniversary of The Italian Job movie and 60 years of the Mini. The centrepiece of the film, however, is a Mini that was sourced by Hagerty for the science department at Stowe School which has since been completely rebuilt by Stowe students.
The young engineering team at Stowe School contacted Hagerty in 2018 asking for advice about rebuilding a classic car. After discussion, this quickly escalated into a desire for a major restoration project and, subsequently, Hagerty located a suitable Mini and arranged for the school to acquire the car for students to work upon.
The film, starring the Stowe Mini, is also a homage to Michael Deeley, producer of Blade Runner, The Deer Hunter and The Italian Job, himself an ex-Stowe School student. Michael will be a guest speaker at the Stowe School Speech Day & The OS Classic Car Show, taking place on Saturday 25th May.
The film, capturing the escape of students who break into the school to steal exam papers, was shot entirely on the Stowe School grounds during a school holiday and will be premiered at the school’s Speech Day. Michael himself has no idea a film has been created and will watch it for the first time on Speech Day along with students, staff and parents, none of whom expect a film to be shown.
A testament to the Stowe attitude of fun over formality at Speech Day, the Stowe School management team granted permission to film, with an almost free rein, on the entire estate, and the result will certainly be a surprise to students when they witness a number of cars at full-chat around the school grounds.
In addition to the film, Hagerty sourced and curated an incredible selection of 100 classic cars, which will be displayed on the Stowe lawns during the event. The line-up includes stars of the film, faithful recreations, 50 iconic and classic Minis as well as a host of classic cars driven to the event by parents and former students.
Each year, Hagerty presents the Steady Barker Trophy to the car and driver with the most interesting story displayed at Speech Day & The OS Classic Car Display. The inaugural winner of the trophy in 2018 went to King George’s prized Daimler. A car that has now been invited to the prestigious Pebble Beach Concours d'Elegance, showing the standard of exceptional vehicles this event attracts.
Stowe has long been associated with classic cars. Ten years ago, the Head of the School encouraged families who owned a classic car to bring it to Speech Day, an event to celebrate the end of the academic year. 35 cars arrived, and classic cars have since become a staple part of Speech Day & The OS Classic Car Display. Today, more than 100 cars are displayed. The beautiful grounds have also been the home for the famous Hagerty Festival of the Unexceptional event for the last two years.
Marcus Atkinson, Hagerty Marketing Director, said “Stowe School likes to do things differently and what better way to celebrate the hard work the students have put into their Mini than to highlight their car on Speech Day in the most dramatic of fashions. Having Michael Deeley in attendance is really the icing on the cake given the Mini anniversary and the fact that Michael’s much-loved film hits 50 years old in a few weeks’ time. The effort in concepting, planning and filming this film in secret has been a huge challenge, but when we watched a trio of Minis in cahoots with the students and their Mini, it was well worth it.
“We would like to thank the team at Stowe for their permission to do this, to Michael Deeley for creating the wonderful original film that inspired us and to all the owners and enthusiasts who have allowed their classic cars to be displayed as an additional spectacle on the day. More importantly, our thanks to the science department at Stowe whose desire to encourage young drivers to enjoy classics is matched only by our own.
“Hagerty is committed to promoting classic cars and the lifestyle to children and young people of all ages, this being just the latest in a long line of activities designed to appeal to young drivers and classic car owners of the future. Today we are at Stowe, next time we will be hosting an openly available driving day for young drivers at Gaydon. It’s the younger generation who will protect our passion for classic cars for generations to come and their involvement and immersion into the sector is vitally important to us.”
We hope you enjoy the film which can be viewed here: https://youtu.be/KPlWucEzl3E
Film Credit: Petroleum
Photo Credit: Amy Shore