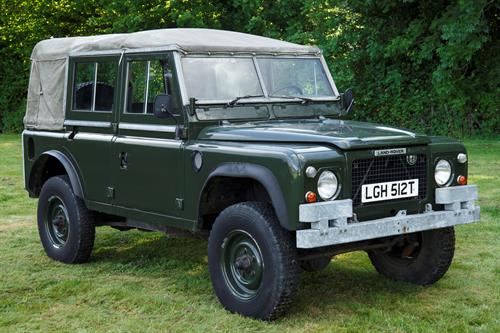 Television presenter, and self-confessed petrol head and serious Land Rover enthusiast Mark Evans will take to the stage at Land Rover Legends on 25 & 26 May to celebrate four Star Cars, each representing a very special milestone in the history of Land Rover.
The former Chief Veterinary Advisor to the RSPCA, BAFTA-winning presenter of ‘Inside Nature’s Giants’ and star of such popular programmes as ‘A 4x4 is born’, ‘A Car is Reborn’ and ‘Inside Jaguar’ will present two sessions per day in the main exhibition hangar at Bicester Heritage, focusing on two Star Cars each time and hosting a discussion with the people behind the cars’ history in a fascinating and personal element of Land Rover Legends.
12.00 Saturday 25 May and Sunday 26 May: Discovery One & SAS Pink Panther
The launch of the Discovery in 1989 was a masterstroke by Land Rover to meet the challenge from new 4x4 vehicles such as the Isuzu Trooper and Mitsubishi Shogun. Land Rover Legends will celebrate the 30th anniversary of ‘the vehicle that saved Land Rover’ through Star Car G457 WAC, owned by Julian Lamb. It is one of only a handful of surviving vehicles from the press launch fleet and was used extensively at the press launch in Plymouth during the late autumn of 1989 and as a test car for a number of magazines.


The 50th anniversary of the entry into service with the SAS of the Series IIa ‘Pink Panther’ will be marked by what is believed to be the largest-ever gathering of these fascinating vehicles, including a Star Car from The Dunsfold Collection. In the late 1960s, the MOD acquired 72 Series IIa 109 Land Rovers for special ops missions and long-distance reconnaissance. Marshalls of Cambridge converted them to SAS desert duty specification, with modifications including heavy-duty springs and chassis, additional fuel tanks to carry 100 gallons, smoke grenade launcher, rifles, machine guns, hand grenades and an anti-tank rocket launcher. They were delivered to the SAS in standard green livery but the SAS had many of them repainted in pink, the perfect colour for camouflage in the desert.
15.00 Saturday 25 May and Sunday 26 May: Range Rover P38A & Land Rover 100-inch
In September 1994 Land Rover launched the second-generation Range Rover, 24 years after the original was introduced. The new car was developed in building P38a of the Solihull factory, and so became known as the P38a. This was undeniably a luxury vehicle, with leather upholstery, premium trim and burr walnut rivalling the interiors of upmarket saloon cars, putting the four-wheel drive in front of a new audience. The Star Car appearing at Land Rover Legends is part of The Dunsfold Collection and is the oldest P38A in existence, a rare survivor from among the batch of pre-production vehicles.


In the late-1970s, Land Rover built around 36 100-inch wheelbase prototypes for evaluation by the French - and later the Swiss - military. Although these vehicles never went into production, the 100-inch wheelbase was felt by many to be the perfect dimension for a Land Rover and enthusiasts went on to create their own ‘hybrids’ based on modified Range Rover chassis and Land Rover panels. Land Rover Legends will celebrate the 40th anniversary of these exceptionally rare prototypes with what is expected to be the largest-ever gathering. Part of The Dunsfold Collection, the Star Car is powered by a prototype 2.25 petrol engine with five main bearings. The gearbox is a prototype 5-speed manual. The middle doors are custom-made and shaped to fit around the rear wheel arch.
In addition to the fantastic range of very special vehicles on show, Land Rover lovers will find a host of other things to fascinate and tempt them, with top Land Rover restorers, specialists and associated suppliers, plus carefully-selected exhibitors and traders, all positioned in and around Bicester Heritage’s magnificent main exhibition hangar.
National Land Rover Awards
The ultimate show for Land Rover connoisseurs, preservationists, restorers and enthusiasts will also see the announcement of the results of the National Land Rover Awards 2019, the winners of which will be chosen at Land Rover Legends. Shortlisted vehicles will be displayed as part of a dedicated indoor exhibition at the Bicester Heritage event where, on Sunday 26 May, a panel of expert judges will select the Winner and Highly Commended entry in each category.


All Land Rovers welcome
Land Rover Legends is an event for all Land Rovers. In addition to the main exhibits and demonstration vehicles, 20 major Land Rover Clubs have booked display space for the event and every Land Rover attending - whether with a club or not - will become a part of the show by being displayed in the dedicated forward-parking area that will be set aside to showcase representatives of the marque.


Dogs welcome too!
This year, for the first time, canine companions are welcome to attend the event (regardless of whether or not they arrive in a Land Rover!). So, there’s no need to leave well-behaved four-legged friends at home; just pop them on a lead and bring them along.


For more information or to book tickets please visit www.landroverlegends.com.