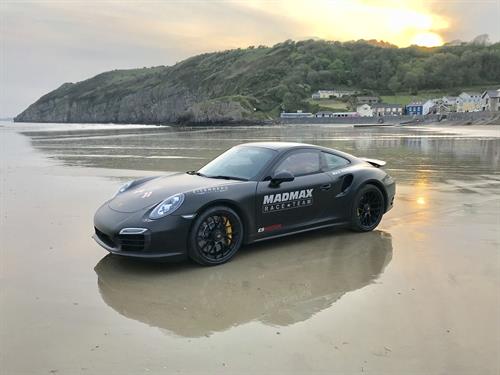 Record-breaking racer Zef Eisenberg and the MADMAX Race Team returns to Pendine Sands, South Wales this weekend (18-19 May 2019) with hopes pinned on smashing the highest speed ever achieved by a wheel-powered vehicle.
Eisenberg, better known for racing motorbikes, makes a switch to four wheels in hope of hitting the 200mph barrier and beyond in a crazy 1200hp specially built road-legal Porsche 911 Turbo Sand Racer!
The record will not only supersede the Wire' star Idris Elba's 'flying mile' speed record (180.361mph) set at Pendine in 2015 but also emulates his hero – Sir Malcolm Campbell, who first set the record at Pendine Sands in 1927 (174.8mph) in the iconic Blue Bird - a record that stood for nearly 90 years.
Just last month Eisenberg established a Flying Mile record racing a 400bhp supercharged Suzuki Hayabusa motorcycle that was built and prepared by his MADMAX Racing Team. His record comes less than 2 years since surviving Britain’s fastest-ever (230mph) motorcycle crash. Since then, Zef has set numerous records including an ACU sanctioned flying quarter-mile, flying kilometre and flying mile.
Over the past 12 months, the MADMAX Racing Team acquired a 2015 550hp Porsche 911 Turbo and has been carrying out extensive research and development in preparation for the record attempt.
Eisenberg said, “sand creates a lot of resistance and tyre slip, so we had to work out that we’d need at least 1000hp at the rear wheels, which equates to a crazy 1200hp at the engine, compared to just 550hp from a factory car.”
The team has built a bespoke 4.1-litre engine with new internals, plus a new E85 fuel system and cooling set-up. A lot of work was done to ensure that the monstrous power would come in as progressively as possible in order to limit wheelspin on the loose surface. To cope with such an extreme output, the transmission had to be upgraded, and the suspension modified to allow for different wheels and tyres. Apart from a full FIA roll cage, competition seats and safety harness, the Porsche’s interior is completely standard.

“Weight is actually your friend on the sand,” said Eisenberg. “It’s about stability – putting enough weight on the tyres to increase traction. The car is also road legal, so I can drive it from the hotel on to the beach and hopefully to the pub after to hopefully celebrate.”


The team have worked tirelessly on the engine to ensure that it can withstand 3 miles of full power with 1000hp at the wheel – it's no mean feat! Plus, many safety aspects have also been addressed. The recent testing at Elvington proved a great success - with just half the power the car was achieving 220mph in the mile on tarmac.
Here’s hoping Zef and MADMAX Race Team will once again race into the history books!