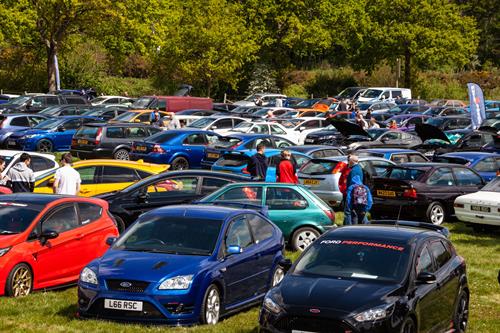 As many as 1,400 Fords of all ages motored into Beaulieu’s Simply Ford for a bumper celebration of all things Ford, marking milestones for two of the marque’s most iconic models, with 50 years of the Capri and 60 years of the Anglia 105E.
The impressive show took over the grounds of the National Motor Museum as 2,870 rally participants enjoyed the vibrant and varied display. There was something to suit every Ford fan, from showroom-fresh Mustangs and customised Focuses to monster American Ford trucks. Everyday Fiestas, lovingly restored Escorts and preserved Populars were parked alongside incredible pre-war hot rods.
Capri owners turned out in force to celebrate 50 years of the iconic model that was famously marketed by Ford as ‘the car you always promised yourself’. Enthusiasts had much to get excited about with the line-up on the Events Arena, as pristine examples of the stylish Mk1 – including a 3000GT and modified track-ready example – were joined by a wide variety of later versions and rare last-of-the-line Capri 280 ‘Brooklands’.
Superb examples of the Anglia also took pride of place, as the family favourite celebrated its 60th anniversary. The selection ranged from an immaculate and rarely-seen Anglia 105E estate to a wild Anglia hot rod, powered by a Range Rover V8 engine.
Show-goers loved the new Mustang BULLITT, a special edition version of the world’s favourite muscle car which was built to celebrate half a century of the classic 1968 film Bullitt. Fitted with a 5-litre V8 engine and painted in dark highland green, this special Mustang is a modern incarnation of one of the most famous cars on the silver screen.
Club stands were a big draw and popular with visitors and rally participants alike. Dorset All Ford Types brought a variety of Fords, including sought-after Sierra RS Cosworth and Sierra XR4i, Cortinas, Granada, Fiesta Mk3 and Scorpio, while the Ford Sierra Owners Club stand included a rare Ford Sierra motorhome conversion. Simply Mustangs UK, Midlands Mondeo Enthusiasts, Nuts 4 Fords and the Rusty Shed Restoration Club also proudly showcased their members’ cars.
Hendy Ford showcased a selection of showroom cars that event-goers could buy, while trade stands sold a selection of spares and Ford-related accessories.
The People’s Choice Award was won by Glyn Baker, from Ringwood, who has owned his Escort Mk1 RS2000 for more than 20 years. During that time the car has been completely restored and Beaulieu’s Simply Ford was the first run-out following its engine rebuild. Glyn was presented with his Beaulieu trophy and Autoglym car care pack prize by Pierre Bonnet, the Sales Planning Manager for Ford UK who has 25 years of experience in the motor industry, working for the Ford Motor Company in both France and Britain. Pierre was in charge of the launch of the Mustang in the UK from 2014-16 and is a true car enthusiast.
Runners-up were Edgar Liranco, from Fareham, for the Mustang he has owned for 18 months and David Pritchard, from Westbury, for the Escort Cosworth he has upgraded to give a staggering 755bhp in the 13 years he has owned it. They were both presented with Autoglym prizes by Pierre.
Simply Ford was the third of Beaulieu’s ten Simply rallies for 2019. Coming next is Simply Porsche on June 2nd, Simply VW on June 15th, Simply Land Rover & Rummage on June 23rd, Simply Jaguar on July 14th, Simply Japanese on July 28th, with the first Simply Mercedes on August 18th and Simply Smart on November 10th. Tickets can be bought in advance online. For tickets and details see www.beaulieu.co.uk/events.
Find us on Twitter @Beaulieu_Hants, on Facebook at /nationalmotormuseum or on Instagram @national_motor_museum and join the conversation.