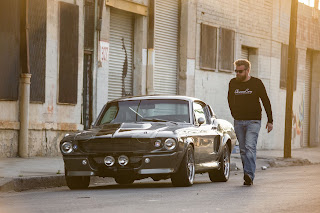 The film car of Nicolas Cage at MOTORWORLD Classics Berlin 2017
The muscle car from Jerry Bruckheimer's film "Gone In 60 Seconds" starring Nicolas Cage is coming to Berlin. From October 5th to 8th the prominent 1967 Shelby GT 500 with the legendary "Go, baby, go" button will be on view at Motorworld Classics Berlin.
In general, the Ford Mustang has frequently played more than a secondary role in films and series from the USA. In "Charlie's Angels", Farah Fawcett was never second best in a car chase, "Knight Rider" showed us a real monster with the Shelby GT 500KR, while James Bond alias Sean Connery in "Diamonds Are Forever" was rather more energetically underway in a Mustang Mach II instead of elegantly English in the Aston Martin. And then, of course, there was "Eleanor" in "Gone In 60 Seconds" with Nicolas Cage as master throw Randall at the wheel. This 1967 Mustang Shelby GT500 was set up for the film by designer Steve Stanford and Chip Foose. Actually, based on a Ford Mustang Fastback, which in turn was revamped into a Shelby replica, the hot rod designers built a truly special muscle car in 1999.
On the sides they placed mountings with air intakes, the bonnet was fitted with wire-locked quick fasteners, and the car featured side pipes and rims in GT40 style as well as the "Go, baby, go!" button on the gear stick. To mention just a few of the extras.
Strictly limited edition of kits
The demand immediately after the film hit the cinema screen was so great that California-based Cinema Vehicle Services (CVS), the company which built the vehicles for the film, decided just to produce a strictly limited series of an estimated 150 "Eleanor" kits for sale to end customers. The kit also included rims, exhaust systems and fibre glass attachments. CVS maintains a list of all the vehicles (together with their respective chassis numbers) which received a so-called "CVS Body Kit".


Chris Zolner, Mustang expert at ChromeCars, couldn't resist the charm of this car either, and so he decided to set off in search of one of these rare vehicles. Poor replicas and cheap tuning - he's seen it all often enough. But: "No body kit other than the one from CVS – not even a licensed product – is authentic," he emphasises. Chris documented everything he could find about the 11 film cars and their replicas.
Photographs of Eleanor at the original film locations
Kai Nieklauson and Oliver Schneider, the founders of ChromeCars, rhapsodise about Eleanor as well. They bought a replica some years ago, their first classic car, and in doing so laid the foundation for establishing their company. And as Chris Zollner joined the team, the automotive archaeologists were finally – 17 years after the cinema release of "Gone In 60 Seconds" – handed the rare opportunity to buy one of the three hero cars. To begin with, Eleanor was photographed by ChromeCars in the USA at the original film locations. This resulted in pictures true to Bruckheimer's film. And now Eleanor is finally coming to Germany! For the very first time, this film legend on four wheels will be on view at Motorworld Classics Berlin on October 5-8.


About MOTORWORLD Classics Berlin
On October 5-8, 2017, in Germany's most international metropolis with its long automotive history, the historic halls of Berlin's ExpoCenter and the summer garden in the shadow of the radio tower will once again create acres of space for an entire world in the style of the good old days. The classic car trade fair MOTORWORLD Classics Berlin is an experience not just for vehicle aficionados and collectors, car clubs and scene fans. A stylish ambience with many lifestyles also attracts more and more public visitors.


MOTORWOLD Classics Berlin 2016 was a huge success with more than 26,000 trade and public visitors, a 30% increase over the previous year. In 2017, the trade fair will be offering, even more, space (in Halls 11 to 21 and the summer garden) for premium exhibitors and a generous helping of lifestyle. National and international automotive manufacturers with historical roots, leading dealers, technology specialists for automotive rarities, vendors of accessories and memorabilia, together with numerous dedicated classic car clubs and private sellers, will be presenting and selling their products and services. The annual classic car trade fair is organised by MoWo Messe- und Veranstaltungs GmbH & Co. KG and Messe Berlin GmbH.
Opening hours:
Thursday: October 5, 2017 (Preview Day): 12 p.m. to 7 p.m.
Friday and Saturday, October 7 and 8, 2017: 10 a.m. - 7 p.m.
Sunday, October 8, 2017: 10 a.m. - 6 p.m.