A. LANGE & SÖHNE: THE WATCHWORLD FOR TIME TRAVELLERS

A. LANGE & SÖHNE: THE WATCHWORLD FOR TIME TRAVELLERS 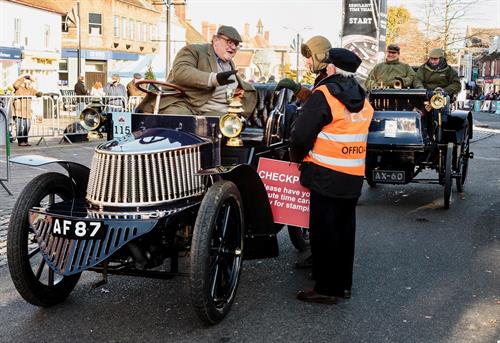 A. Lange & Söhne to support Regularity Time Trial at the 2019 Veteran Car Run
The Bonhams London to Brighton Veteran Car Run is delighted to announce a new partnership with A. Lange & Söhne. The renowned German luxury watchmaker will support the historic event’s increasingly popular timed section of the Run, now renamed for 2019 as the A. Lange & Söhne Regularity Time Trial.
The A. Lange & Söhne Regularity Time Trial allows participants to enjoy the pleasure of competition. Entrants can nominate the average speed they think they will maintain over a timed section of the route with the winner being the driver that gets closest to their prediction.
First introduced in 2015, the initiative has snowballed with no fewer than 75% of participants contesting the appealing time trial in 2018; nearly double the number that had entered four years previously.
Miles Wade, Club Secretary of the Royal Automobile Club, said: “The Regularity Time Trial has now become an integral part of our Run, and this year we’re looking forward to making it even more special with our new Timing Partner, A. Lange & Söhne. As one of the finest traditional watchmakers in the world, the rich heritage of the brand complements the Run perfectly.”
Time-keeping and mechanical workings have always played an important part in motoring events throughout history. Like the pioneering cars on the Run, the exquisite timepieces lovingly produced by A. Lange & Söhne are hand-crafted, precision-engineered and full of innovation.
The annual Veteran Car Run celebrates the first ‘Emancipation Run’ from London to Brighton held in November 1896 and is the world’s longest-running motoring event. The original Emancipation Run marked the passing into law of the Locomotives on the Highway Act raising the speed limit for ‘light locomotives’ from 4mph to 14mph and abolishing the need for the vehicles to be preceded by a man carrying a red flag.
With a rich history of its own, A. Lange & Söhne was founded more than 50 years before the Run in 1845 by Ferdinand Adolph Lange in Glashütte near Dresden. Today’s portfolio of gold and platinum wristwatches are still inspired by the complex and beautiful timepieces of the company’s passionate and painstaking creator.
Wilhelm Schmid, CEO of A. Lange & Söhne, explained: “Speaking from experience, I know that there is a great deal of common ground between car and watch collectors: ultimate craftsmanship, technical innovation and unrivalled heritage are the key values of both vintage cars and A. Lange & Söhne’s approach to watchmaking.”
As tradition dictates, the Bonhams Veteran Car Run – organised by the Royal Automobile Club since 1930 – will take place on the first Sunday in November, which this year falls on the 3rd November. More than 400 two-, three- and four-wheeled vehicles – all built before 1905 – will take part in the 2019 Run and hundreds of thousands of spectators will line the roadsides as the veteran convoy journeys from London to Brighton.
Full details of the event can be found on the new device-responsive www.veterancarrun.com website.
Posted by jeffharris at 23:26