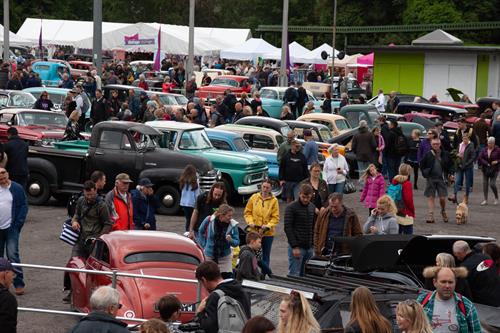 New show ambassador Andy Saunders presented his first award at Beaulieu’s popular Hot Rod & Custom Drive-In Day Father’s Day event, as 5,484 event-goers and 380 hot rods and customised vehicles gathered in the grounds of the National Motor Museum.
Getting the retro weekend off to a great start was Simply VW on Saturday, June 15th, with 528 Volkswagens and 1,280 show-goers joining the chilled-out show, as part of a retro motoring weekend with Vintage Village fashions, live music and dancing.
Renowned car customizer Andy Saunders picked Michael Castle’s Pro Street 1980 Ford Cortina as his car of the show at Hot Rod & Custom Drive-In Day, which is held in association with Solent Renegades club. Delighting show-goers with the roar of its brutal 8.2-litre V8 engine, Michael had driven this drag racing star down to the show from Middlesbrough.
Presenting a custom-made trophy and Autoglym valeting pack to Michael, Andy said: “It was tricky narrowing it down from my 32 favourites but this Cortina is fabulous and epitomises what we were doing on the custom scene in the late 1980s and early 1990s. It was built 30 years ago but has only recently resurfaced and the work that has gone into building the car is absolutely incredible... and road-legal. It doesn’t get any better than this!”
The award for Best Custom went to Chris Clemens, from Winchester, for his 1960 Morris Minor 1000. Andy, who presented trophies and Autoglym packs to all of the winners, said: “This car is so pretty with its cherry red paint. It is beautiful to see a custom car of this age where everything is correct, from the slot mag wheels to the twin-cam engine.”
The Best Hot Rod award went to Dave and Carole Sharp, who had driven from Kent in their stunning 1928 Ford Model A. Best Bike was awarded to Chris Head and Dave Hiles, from West Moors in Dorset, for their monster-engine trike, while the coveted Best in Show award was presented to Dave and Angie Owen, from Bournemouth, for their bright orange V8-powered 1955 Ford Anglia. Andy was joined to present the Best American award by Solent Renegades’ Dan Potter, who had chosen the 1951 Pontiac Chieftain owned by Barry Dunwoodie, from Ringwood.
For the first time in 2019, Classic American magazine held the regional heats of its Car of the Year award at the show, inviting the best unmodified American cars to compete. Earning a place in the competition final at the NEC’s Classic Motor Show in November was Brian Forsdike, from the Isle of Wight, for his 1957 Ford Thunderbird.
Andy, who arrived at the show in his 1937 Cord Westchester Tetanus, spent the day talking to fans and revealed his new project, a Riley RM. He said: “At International Autojumble last September, I bought a pair of wings for a pre-war Delahaye 135M, which have a wonderful shape to them but I needed to find a car to fit them to. I eventually found this Riley RM, which will be ideal for my next car build. I’ll restore the original chassis and keep the stock Riley running gear but I can make a whole new body for it, which will be lower and sleeker. I don’t know how long it will take . . . but I hope it doesn’t take 14 years like Tetanus did!”
Also wowing show-goers was the famous hot rod Coffee Grinder, one of the first American hot rods to be imported to England in the 1960s. It was brought over by celebrated pop-artist Gerald Laing and has recently been bought back by his sons. The impressive selection of cars on show included smooth low-riders, powerful pick-up trucks and stock American classics dating as far back as the 1920s. The event also included a special show of bikes, from retro scooters to choppers and monster-engine trikes.
At the Breeze Volkswagen Commercial Vehicles-sponsored Simply VW event on Saturday, the People’s Choice Award was presented to Russell Payton, from Newbury, with his restored 1964 Karmann Ghia. Runners-up were Sarah Walkey, from Portsmouth, with her pink wrapped 2013 Beetle and Brandon Hayes, from Wimborne, with his custom-style 2000 Beetle. They were both presented with Autoglym prizes by Stuart Hack, the sponsor’s Head of Business.
Across the weekend, Bows & Braces ran a colourful Vintage Village packed with nostalgic collectables, records, jewellery, luggage, kitchenware and retro clothing. There was a bigger than ever Vintage Tea Tent, while Bournemouth Lindy Hop Club gave dance demonstrations with Jitterbug Jive and there was live music on the arena stage.
On Saturday, Bows & Braces presented the Best Dressed Vehicle award to Sharon Drewell, from the Isle of Wight, who brought the impressive combination of her 1968 VW Beetle towing her 1963 Eriba Puck caravan. On Sunday, the Best Dressed Individual awards went to six-year-old Aylar Pashapour, from the New Forest, while the Best Dressed Group was Frank and Pam Annable, from Bournemouth, and Best Dressed Vehicle was the Mad Max-style 1993 Lexus of Rogan McGilp, from Hereford.
Coming next on Beaulieu’s events calendar is Simply Land Rover on June 23rd, Simply Jaguar on July 14th, Simply Japanese on July 28th and Beaulieu Supercar Weekend on August 3rd-4th. For tickets and details see www.beaulieu.co.uk/events.
Posted by jeffharris at 19:37