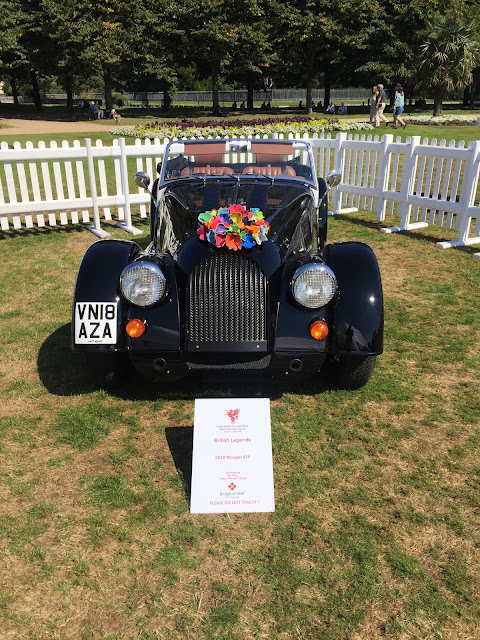 Concours of Elegance and Bridge of Weir Leather Company partnered up once again this year to present a very special ‘British Legends’ feature, celebrating the very best of automotive design to come out of Britain over the last century.
Notable friends of the Concours and Bridge of Weir each chose a British car they deemed deserving of the status of British Legend.
Visitors to the Concours of Elegance were invited to vote for their favourite of the ‘British Legends’ nominated by stars of the automotive.
Taking more votes than any of the other iconic models nominated, the Morgan 4/4 was named the public favourite from the British Legends feature yesterday.
Nominating the Morgan 4/4, Morgan Motor Company head of design, Jon Wells, said:


“The Morgan 4/4 is the world’s longest-running production vehicle. First launched in 1936, the 4/4 has arguably imposed timeless design status upon itself by simply continuing to exist. For people of all generations, the classic Morgan silhouette propositions a comforting nostalgic appeal. Today’s 4/4 still proudly exemplifies the art of British coach-building, and in doing so offers all the joys of classic motoring with the benefits of reliability and comfort that come with a newly built car. It is and always will be right up there as my most admired car, and is quite rightly considered a true British Legend. Our thanks to the Concours of Elegance and all the voters for this wonderful accolade.”


Bridge of Weir Managing Director, Karen Marshall, said:
“We have been honoured to display a very wonderful selection of cars at Hampton Court Palace, and the Concours of Elegance – among the most spectacular of automotive gatherings in the world. Our congratulations to Morgan, and thanks to all of the manufacturers and owners who supported us with their fine products at the show.”


Other cars in the line-up included a 1961 Jaguar E-type, 1967 Jensen FF Vignale, 1979 Rolls-Royce Silver Shadow, 2018 McLaren Senna and a 2018 Aston Martin DB11 Classic Driver Edition.
Bridge of Weir has been in the business of manufacturing leather for the automotive industry since 1905, supplying to many of the most iconic manufacturers, including Aston Martin, Ford, Jaguar Land Rover, McLaren, Volvo and many others.
Source: Bridge of Weir