A popular icon of 1950’s and 60’s motoring, Everoak Helmets were the protection of choice for motorists and bikers alike, including Stirling Moss, Graham Hill and Pedro Rodriguez. The iconic Everoak has endured as a much loved symbol of the classic era of racing and with the resurgence of retro brands, Everoak is set to make a longed for return. Step forward master craftsman Bill Vero to handcraft perfect replicas of these world-famous helmets!


Bill Vero, one of the most experienced helmet makers in the world, will be using a lifetime of experience and craftsmanship to make replicas from the golden age of motoring. Grandson of original founder Everitt W Vero, Bill Vero has re-started hand making individual Everoak helmets, exact to their original design and specification. The perfect display item for a collector or enthusiast, Bill can replicate helmets worn by famous drivers who won National Championships; for example Stirling Moss, Mike Hawthorn, Jack Brabham, Graham Hill, Pedro Rodriguez, Innes Ireland and Jim Clark. Taking nearly a month each to create, the helmets are manufactured using traditional processes and each will be a rare, unique and special piece, meeting the client’s exact specification. Nothing else like this exists and Bill has both the knowledge and skill to bring each one to life.
Maker Bill Vero says "There's no way these could be worn today for historic racing; they're display pieces, but you could wear one in your classic to go down the pub."

Anyone interested in seeing one for real or owning the legend that is an Everoak Helmet, should pop into The Signature Store or go along to Goodwood Revival (12-14  September 2014), where a classic ‘Moss’ and a Jack Brabham replica will be on display on the Porter Press stand in the market.

In addition to re-launching this range of exclusive, iconic helmets, Everoak are also set to launch a merchandise line in the next few weeks, starting with T-Shirts in partnership with RetroF1 and with more merchandise planned for the future.

Helmets cost from £695 and will be one of a kind replicas made by Bill Vero. For more information visit www.everoakhelmets.com 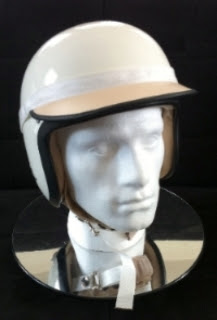 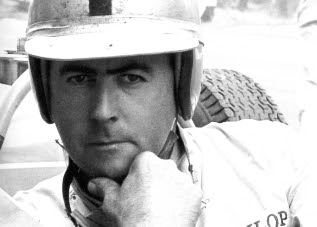 The History
Originally purchased through retailers such as Herbert Johnson, Les Leston & Griffin, the name Everoak was highly respected as a maker of crash helmets for over a century. Everoak was established in 1878, making pith helmets and ‘skidlids’ for dispatch riders. Post 1945 saw a boom in demand for motorcycle helmets and Everoak became a leading helmet manufacturer.

In the 1950s, Everoak released a glassfibre helmet shell which was selected by Mike Hawthorn as his racing apparel. Following his Championship winning success in the 1958 F1 season, the helmet was redesigned and released as ‘The Racemaster’.

Racemasters proved enormously successful throughout the 1960s and with the introduction of polystyrene and the development of a full face helmet in the 1970s the family company continued well into the 1990s before Bill moved on to form his own company working with Kevlar and carbonfibre, making carbon-composite riding hats.

Retired since 2012, Bill started making Racemasters again, initially as a hobby. Individually handmade, Bill employs Madge Gage who worked at the Vero factory to produce all the leather parts. Bill makes every helmet by hand, using tooling from the factory; you can choose your headband diameter within the shell, and of course the design on the shell. To emulate your boyhood hero you can have a Hawthorn, a Brabham or a Moss, but what you can be certain of is the exclusivity and quality of a product made by the most experienced helmet maker in the world.