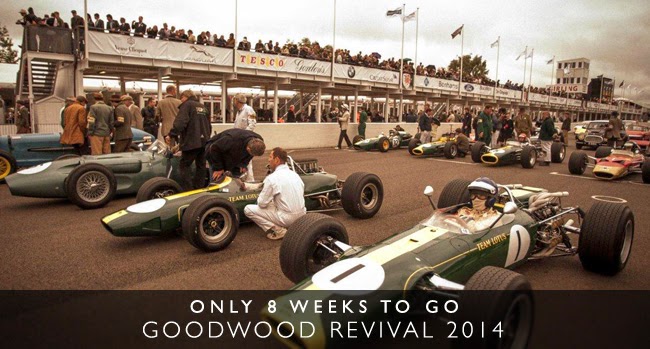 With just eight weeks to go until the Goodwood Revival, the excitement is really starting to ramp up - especially since we can start to share all the exciting features of this year's event with you.

We have some incredible announcements in this very newsletter, but there are many more to come as we get closer to 12 September. We can promise you that the events and drivers booked in will make this a very special year - and we have some fantastic competitions, so watch this space.

As always, tickets are selling rapidly and Saturday is already sold out, but that is all the more reason to act quickly to pick up tickets or grandstand packages for one of the other days.

The St Mary’s Trophy race is always one of the highlights of the Goodwood Revival meeting, and this year’s is set to be an epic battle. We’re used to seeing a number of top drivers hurling (and we really do mean hurling! Check out this video of the 2012 race) saloon cars around the Goodwood circuit as a sell-out crowd looks on, but this year we have an unprecedented line up of British Touring Car Championship drivers past-and-present.
Fabrizio Giovanardi, Matt Neal, Gordon Shedden, Andrew Jordan, Jason Plato, and Robb Gravett have all been champions, and will be fighting for top spot in a range of Alfa Romeos, Austins, Fords, Vauxhalls, BMWs, and a number of other Fifties saloons. As we go to press it’s likely that both John Cleland and Colin Turkington will be added to the list of former champions, although there will be even more ex-BTCC talent on display in the form of Steve Soper, and Methuen House Captain Anthony Reid, both of whom came within an ace of winning their own titles. That would make a total of 10 BTCC aces …
The event has also thrown together some interesting partnerships. 2013 champion Andrew Jordan will be sharing a 1958 Austin A40 with his father Mike, who was no stranger to the top of the podium throughout his racing career, whilst Jason Plato will share a 1959 Ford Prefect 107E with TV chef and celebrated petrolhead James Martin.
Speaking of Jason Plato, keen BTCC fans will have noticed that he’ll be on track with Matt Neal; a certain recipe for entertainment given the many, shall we say… ‘exuberant’ battles between the two over the years!
The race itself is a two-parter, with the pro drivers taking the first and gentleman drivers in the second. The overall winners will be calculated as an aggregate of the two races.
To secure your ticket go to www.goodwood.com. You don’t want to miss this one!
So, who’s your money on?