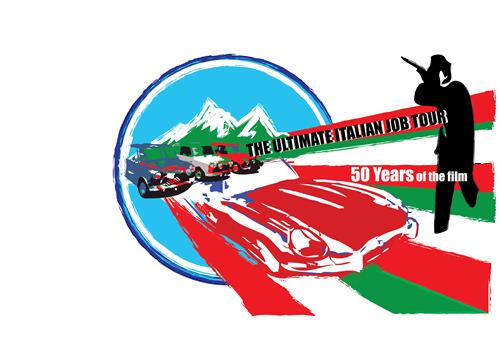 Classic car owners are being invited to commemorate the 50th anniversary of The Italian Job on an extraordinary 11-day driving tour which takes in many of the famous roads and locations featured in the movie. The Ultimate Italian Job Tour, created by Classics on the Road and the Jaguar E-type Club, will treat drivers and their companions to some of Europe’s most fabulous roads and scenery as its route passes through France, Italy and Switzerland between October 6th and 17th 2019.
Highlights of the Tour will include a driving experience on the rooftop test track of Fiat’s former Lingotto factory in Turin, which appeared in the movie’s legendary car chase; driving some of the most spectacular mountain roads in Europe, and an evening with key personalities involved in making the film.
Participants in the Ultimate Italian Job Tour will be accompanied throughout the 1,400-mile drive by a swarm of red, white and blue Minis, and by the red Jaguar E-type roadster, orange Lamborghini Miura P400, and silver Aston Martin DB4 convertible seen in the movie. The Tour visits the St. Bernard Pass, scene of the film’s opening credits, where the Miura was blown-up in a tunnel and the E-type and DB4 also met their fates.
While in Turin, Tour participants will spend a few days in the company of The Italian Job producer Michael Deeley; stunt director Rémy Julienne; actor David Salamone, who played Dominic, one of Charlie Croker’s gang of ‘Chinless Wonders’; and subject-expert Matthew Field, whose new book, The Self Preservation Society – 50 years of The Italian Job, will be published later this year.
The three-day Italian Job experience will also include a private screening of the film; a ‘soirée’ hosted by Field; a Walking Tour in the city of car-chase locations with commentary by Field, visiting the Baroque staircase of the Palazzo Madama, the crowded porticoes on Via Roma, the cathedral steps and the weir on the River Po. Tour participants will also receive a copy of his book.
In keeping with its theme, the Ultimate Italian Job Tour is open exclusively to E-types, and to pre-1970 Lamborghinis, Aston Martins, and Minis. The price –  €5,495 per person in double occupancy or €6,575 per person in single occupancy – includes accommodation in carefully selected four- and five-star hotels in France and Italy; three lunches and 10 dinners; a comprehensive Road Book with Tulip notes, maps, rally plates, information about places being visited, and recommendations of other places worth seeing; a private evening screening of The Italian Job; and guided visits to the Domaine Pommery champagne cellars, Arc-et-Senans Royal Saltworks, Museo Nazionale dell Automobile in Turin, Mont Blanc Skyway, and Matisse Museum in Le Cateau-Cambrésis.
Tour participants will be accompanied by the event organisers, including E-type Club co-founders Philip and Julie Porter in their E-type, the original Italian Job roadster, 848 CRY; a film crew and professional photographer; and a mechanic.
Philip Porter commented:
“The Ultimate Italian Job Tour is going to be amazing. It will be unique and probably the last opportunity to celebrate this iconic movie with key people from the film, combined with fantastic driving, the star cars and informed visits to most of the charismatic locations”.
To find out more about the Ultimate Italian Job Tour or reserve a place, please visit www.classicsontheroad.com
Jaguar E-type Club
Founded 15 years ago by Philip and Julie Porter, the Club has members in more than 50 countries. Porter has written 30 motoring books, including a number on Jaguars, and owns two early E-types of historical significance: the prototype registered ‘9600 HP’, which was the first Fixed Head Coupé and one of the pairs which launched the E-type at Geneva in 1961; and the roadster ‘848’ CRY, which appeared in The Italian Job. The E-type Club’s patron is Norman Dewis (OBE), who joined Jaguar in 1952 as Chief Test Driver and helped develop production and competition cars including the E-type.