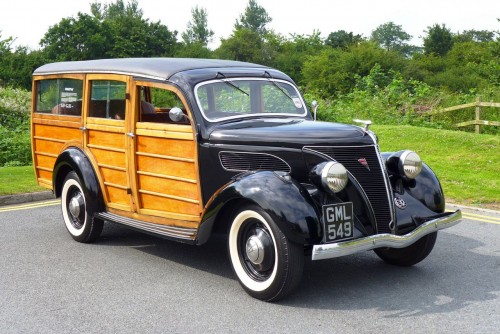 Despite Ford’s dominance across the globe, the UK market was not truly cracked until 1932 when they launched the small Model Y, a car designed specifically for the British market.
The problem was the UK’s car taxation policy which was based on cylinder diameter (the RAC horse-power formula), making the cheap Model T as expensive to tax each year as a Rolls-Royce. In 1935, Ford launched an entirely British-made V8 called the Model 62. The new, small capacity V8 engine had a conveniently narrow 66mm bore and was fitted in a Dagenham-built compact saloon. It used a chassis and suspension similar to the US models, its 2,227cc V8 developing 63bhp at 4,300rpm. The Model 62 was replaced by the Model 68 a few years later with a full-size V8 from America, this car eventually morphing into the post-war Pilot.
A very limited number of Model 62s escaped Dagenham with practical Woody coachwork. Popular with large estates for shooting parties and collecting visiting weekenders from the local station, they mirrored the American trend for all-wooden bodies with three rows of seats and a fold-down tailgate.
This fascinating example is well known in Ford circles having been on display between 1981 and 2000 at the Ford Heritage Centre in Dagenham. It was used in Ford’s 75th Anniversary film ‘A Special Relationship’ directed by Julian Pettifor which focussed on Ford’s history in the UK.
In 1984 and 1985 it was invited by the Queen Mother to visit Sandringham, a specially built Ford Pilot Woody having been a firm favourite of King George VI after the war and used on the estate. The Queen Mother wished to reacquaint herself with a similar car, a photograph of her alongside this Woody somewhat bizarrely being featured on a postage stamp used on the island of St Helena!
Surfacing in East London during the 1970s in basically sound condition, GML 549 was given a spruce up which sufficed until it joined the museum in 1981. At this point the sound woodwork was sanded and revarnished, the car having been carefully maintained ever since.
One of only two such models thought to survive, this lovely Woody has plenty of go from its rumbling V8, as we found out during a short test drive on the occasion of our visit, and would make ideal transport to the Goodwood Revival, champagne picnic and six mates in the back. Who knows, you might even get a phone call from the Palace…
For More details visit:  http://www.brightwells.com/ClassicCarsMotorcyclesAutomobilia/ClassicVehicles/Catalogue.aspx
Source: Brightwells Auctioners 2014
Posted by jeffharris at 06:09